“The power of the sprinter; the poise of the gymnast; the joy of victory; the exhilaration of the dive; the agony of defeat; the audacity of the high jumper… Every sport has its own unique rhythm, its own secret pattern, its own code.”

After the success of his solo show ‘The Space Between” in 2011, Andy Farr will be bringing the spirit of the Olympics to Gallery150, in Leamington Spa.

After a period of experimentation with abstract landscapes and cityscapes, the artist, who returned to painting in 2008, after what he refers to as “a brief pause of twenty years”, has shifted his focus to capturing the essence of movement. This fascination has led to a series of works inspired by carousels, dance, horse racing and sport. The artist begins each work by watching a slow-motion film of the subject to isolate the underlying rhythms, which he sketches then builds into a pictorial composition. 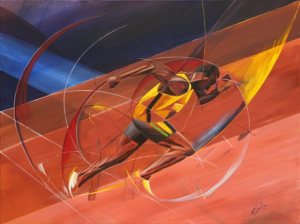 In the ‘Rhythms in Motion’ exhibition, which runs from 17th July-5th August 2012, this highly experimental artist will be presenting a series of works inspired by sport, movement and the emotions and achievements of athletes.  In an impressive play of brushstrokes, depth, colour and light, this series of considered works show echoes of Kandinsky, Boccioni and Rothko, culminating in a complex blend of styles and textures, that hover on a line between Abstract Expressionism, Cubism and Futurism.

The private view of the Rhythms in Motion exhibition will be held on 17th July from 7pm.