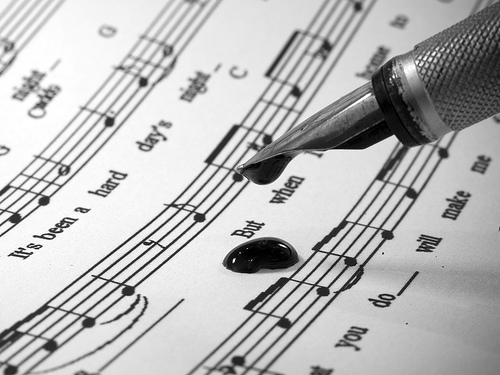 Some rights reserved by MarkyBon

When composers and writers collaborate, what comes first – the words or music?  UCF hosts a conversation between Mariam Al-Roubi, singer, songwriter and librettist for the opera Mirabai, and its composer, Barry Seaman.

How does a creative work, such as an opera, develop from idea to tangible form through musical and written language? What is it like to adapt original text to produce a libretto? How do you ensure that you honour the original text (the opera subject, Mirabai, was herself a mystic poet, musician and dancer from 16th century Rajasthan).  How do you integrate newly written poetry? How does a composer work with a writer?  How is it different to working on an album? These questions will be explored and the dynamics of creative minds working together discussed, using musical examples.

Barry studied at York University, specialising in composition, and works have been produced and commissioned in most media, with broadcasts on Radio 3 and his music for silent films Tsar Ivan Vasilyevitch Grozny (Alexander Ivanov-Gai 1915) and The Life of Richard Wagner (Carl Froelich 1913) was widely toured in the USA. He has a special interest in music as a healing process. His most recent project is Mirabai, a large scale multimedia opera that combines ancient spiritual and romantic ideas with astonishing technology in collaboration with Musion Systems.

Mariam is a classically trained singer, dancer, musician and poet.  Whilst writing the libretto for Mirabai, she is also working on a number of projects, including her studio album. She studied BA (Hons) Music Technology at Rose Bruford College of Theatre and Performance.

Mirabai is the third of a trilogy. The first two pieces were large-scale choral works: The Consoling Song (words in Sanskrit from the Bhagavad Gita; commissioned by The Brighton Singers and first performed in Brighton UK 2002) and Bhajans (words by Nimisha Patel and Elizabeth Newman; commissioned by The Madrigal Choir of Binghamton and first performed in Binghamton NY USA 2007).

In March 2013, The Lake, and Petals, two excerpts from Mirabai, were premiered by the Ealing Symphony Orchestra and the Krishna Dance was shown as part of the annual Kinetica Art Fair in London, presented by the Musion Academy. A short film of the Krishna dance scene has been produced, and directed by acclaimed film director, Tony Palmer.

This event is FREE to attend but advance booking is essential.