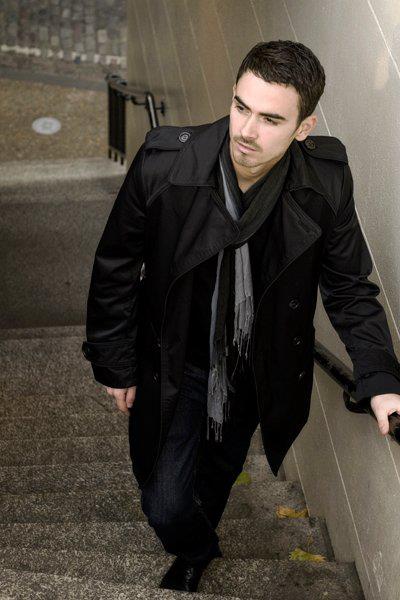 Ryan John is a singer and song writer who currently lives in Chatham, Kent. He writes from home and has a home recording studio set-up, but also records in Camden, London at Zay-D’s studio, who are the production company that produces some of Ryan’s material.

Ryan John has lots of projects in the pipeline and is currently looking for a publishing deal and agent that enables him to have an amount of creative control over his work. To listen to Ryan Johns music visit his MySpace page at www.myspace.com/ryanjohnmusic

I caught up with Ryan to find out more about his past present and future….

So Ryan, have you studied in a creative subject or is this a new road for you?

I haven’t studied in a creative subject no. Obviously during school I studied drama, music and expressive writing, but that’s as far as it went. I’m a huge fan of music and learnt nearly all I know this far from listening and analysing. I only actively started writing songs 6 years ago. I would listen to music all day and sing along knowing every single lyric, breath and ad lib. So I sat down one day and decided to give it a go myself! My first few attempts were pretty average to say the least, but I persisted and had a real desire to get better, which I did quite quickly! I also produce some of my own music and went the same way about learning how to produce and arrange.

Have you always been a singer, or did you only recently discover your talent?

I would always sing on my own, but I was not always a singer. I used to be quite shy of who I sang in front of, especially in my teens. When people did manage to hear me sing they would always compliment me and say that I should pursue it, but I would just laugh it off. After I left school my desire was to be a Professional Footballer, as it had been all of my life up until then. I signed a 3 years contract with Gillingham Football Club at the age of 16 as a trainee Professional. During this time I would train during the day and then go home and do nothing but listen to music and sing! Steadily it became like an addiction and I found myself getting distracted from football. At 19 my contract came to an end and I wasn’t offered a professional contract, which was probably the right decision as my mind lay elsewhere. Music then took over my life and I dedicated all of my time to learning and growing as an artist and as a writer.

So for people who want to sing professionally how important do you feel singing lessons are?

Singing lessons are a very good idea. You need to know the techniques. Breathing and projection are very important. Also learning how to use your different voices such as falsetto and chest voice are key. I had lessons when I first started out 6 years ago. They put me on the right track and have helped me massively since. Also, practising is just as important as lessons. Just singing along to your favourite songs and trying different harmonies are a great way to refine your talent.

Okay so can you play any instruments?

I play keys/piano best, I am self-taught. I wouldn’t be able to play a piece from Beethoven, but I know music theory and how to construct song sequences and structures. Luckily, these days for people who are not graded musicians, there is digital production, which I do a lot of. With this, the most important thing is that you know what sounds right and works best rather than being able to actually play it.

Do you have any other Creative skills?

I loved drawing and art as a youngster. I still do but dont get the time to do it anymore. For now music is the main focus but some time in the future I would like to take acting lessons and try my hand at it. I’m a huge fan of movies and drama, some of my biggest artistic role models are actors such as Robert De Niro, Al Pacino, Johnny Depp, Daniel Day Lewis and Robin Williams, to name just a few. I would also like to write a movie. I have started a few ideas and they are in the early stages. ‘Good Will Hunting’ is my favourite movie, which starred, and was co-written by Matt Damon. I’d love to do something like that!

A lot of singers change their style over time, do you think it is important to move with the times or would you prefer to be consistent?

I believe its important to move with the times. When I say that, I do not mean that people should copy, or follow trends, but quite the opposite. Be innovative. Try things that have not been tried before, take chances. But, at the same time, maintain a consistent standard of work. I try to write from a different perspective every time I start a new project. I could write hundreds of songs about the same thing and just change the words and melody around, but its the concept that hasn’t been covered or thought of that interests me the most. The most important thing for me is that people can identify with, relate to and enjoy my music.

And what type of music do you enjoy listening to?

I have a very diverse taste in music. I listen to a lot of Motown, Soul and RnB mainly. I prefer to listen to artists who have input in the creative process of their work, rather than just singing it. You can hear the connection and emotion behind the words when somebody actually wrote a song themselves.