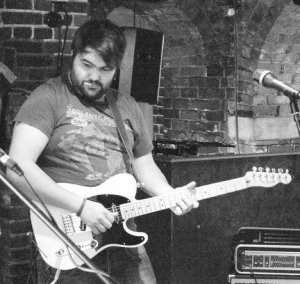 Luke Crook works for indie music label “Sunday Best” and he will be writing about what it is like to work for an indie label as well as what is going on in the world of indie music. We knew you would like to know some more about Luke so we asked him some questions so that you can get to know him better.

So whats your creative background?

Creatively my background has more or less always been musical. I found my Dads rock vinyl, told my Mum I wanted to play guitar and ended up learning piano for about 3 years! Then I went on to teach myself guitar, and after that a bit of bass and drums. Jack of all trades!

After that I got into sound engineering, mixing and the like. From there I did my A levels in Music Technology then trotted my way up to De Montfort University in Leicester to do a BSc in Audio Recording Technology. Maths, Physics, expensive mixing desks and general madness. Lots of fun!

What made you get involved in the indie music field?

I’ve always been a fan of local music, and Medway has always been a hotbed of musical talent. I spent most of my early teenage years getting down to Bar M and the Rafa Club to watch bands, or trying to get gigs myself. I played in a variety of bands myself, and I had a pretty eclectic musical upbringing, so it varied from heavy metal to pop to bluesy bands. I loved and still love the ethos behind local and indie music. Trying to make it, doing it for the love and fun.

The journey at local level is beautifully organic and frustrating.Out of Uni, I wound up working in my local indie record/guitar shop, Sound & Image, for a year which was an education in genres! From there, I was finding myself looking more into independent record labels and independent artists, and how their popularity can vary. People forget sometimes, I think, that Adele goes out on the label XL, who are an indie, not a major, and just look at her success.

Then, from there, I sent a very innocent e-mail to Sunday Best inquiring about a job, and on a Sunday at about 9pm I got an email asking me if I’d like to start as intern! That was 10 months ago, and now I’m neck-deep in the indie industry!

Locally, my biggest influence has to be the wonderful Manny Rossiter. Long standing supporter of local music and also my mentor, what the man doesn’t know isn’t worth knowing! Also, when I was younger local bands like Innersense and Back To The Drawing Board were favourites of mine and they probably helped start my musical bug. There’s also an old boy who regularly comes into the shop called Pat. He’s probably one of the best guitar players I’ve had the privilege of knowing. He played with a lot of great bands back 60-70 years ago and watching him play has been a big game changer for me.

Universally, it’s not limited to music. Musicians like John Martyn, Jeff Buckley, Stevie Ray Vaughan, Nina Simone. Composers like Tim Burton and John Williams. Music that breaks the mold and makes you go “Wow, how did he/she do that?!”. Writers like Terry Pratchett and Douglas Adams who take wacky ideas to the extremes. What’s more inspiring than one man who’s written nearly 40 books about a turtle that flies through space with 4 elephants on its back, or another who wrote about a robot with depression and a restaurant at the end of the universe which recreates the big bang over and over?!

Good question. I’ve only just started out in the career path, but I’d like to take it as far as I can. I wouldn’t mind heading up an indie label one day, that would be amazing! I’ve got a few musical projects in the pipe line that, personally, I’d like to get done and have some fun with.

I guess I’d like to be known as someone who influenced or helped others. It’s a nice way to be remembered I think. Plenty of people have helped me along the way. Soppy, I know!

Tricky! There are so many!

http://fd2d.com/ is a great website/magazine I found at Uni for Midlands based creatives.
http://www.thisisfakediy.co.uk/ is great for music.
Also, check out http://amazingradio.co.uk/ It’s a great online radio station for unsigned and new music. It should be back on DAB radio soon too.

Thank you Luke for bringing some news and information from the indie music world to Creatabot!