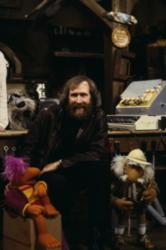 I have always been a huge Jim Henson fan, my dream was to work at their Creature Studios in Camden, I was even offered work experience there whilst at college, which sadly fell through as they began working on a “top secret project” – I now believe this was actually closing the Camden studios.

It is no secret that I love Medway, and now I am in love a little bit more thanks to my friend Laura Murthy breaking the news on Facebook that the UK inserts were filmed in none other than Medway’s very own Gillingham.

For those who didn’t already know (like me) where the joy that is Aldi now sits (although I do like their waffles) once sat the Plaza cinema, which was built in 1931. At the time it was one of the most modern cinemas in Kent with seating for 1,800 people. This then closed in November 1980 and was bought by TVS South and turned into studios.

“The original intention had been to sell it off as soon as Maidstone was open but TVS hung onto it for a while, making programmes such as regional afternoon magazine Not for Women Only and from 1986 The Television Show, which was broadcast live from here on Sunday evenings across the ITV network.

Oddly, the show that kept the studio open was Muppets spin-off Fraggle Rock, which ran from 1983-1987.  Once this ended the studio was hardly used so it was put up for sale early in 1988 and was purchased by Network One TV in June 1989.  (This company also took over the Greenwood in 1990.)  Masterchef was made here then, plus a handful of other shows.  It closed as a studio in July 1991 and following a brief spell as a Quasar laser gaming centre, it lay empty for several years and was demolished in 2001.”(Taken from TV Studio History)

Victor Pemberton who was co-producer at the time says “We took over an old cinema in Gillingham in Kent, and it was wonderful. The auditorium was cleared of seats, the stage was raised and extended.” (www.adventuresinprimetime.wordpress.com/2008/06/01/return-to-fraggle-rock)

The UK scenes involved the internal shots of the lighthouse, where Sprocket the dog lived with the lighthouse keeper, and of course, the tell tale “tiny cave in the wall”. (if anyone knows of other shots filmed there involving more Fraggles please say)

The main episode I remember, which was the episode I watched over and over again,  was when the water of Fraggle Rock was poisoned and Boober pleads for the humans to make it stop. The scenes that were filmed in Gillingham (inside the lighthouse) can be seen in this clip. I now watch this in awe even more, when realising it was filmed on ground I have walked over many times without even realising. It may sound silly, but it makes me a bit emotional! Here is the clip for you to enjoy…

One thought on “The Days When Gillingham Fraggle Rocked”