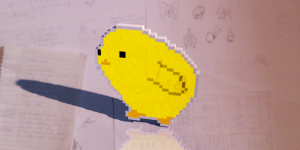 We like to include all types of creatives in Creatabot which is why we are really pleased to have Jack working with us. Jack is a game designer from Rainham in Kent. We wanted to know more about how and why Jack got into game design so ran a few questions by him…

So Jack, have you always been creative?

Well, my Mum always said I was born with a pencil in my hand so I guess it started from there, although to be fair it was probably a few years later before I actually picked up that pencil and did useful stuff with it. I’m pretty sure she’s still kept a load of my old drawings, that’s embarrassing. I sort of pottered around until I left school, not knowing what path to take.

How did you end up working in game design?

I studied Art and Design at GCSE and enjoyed it, but it felt more restricting than creative. Its more luck than anything that I fell into games. There was a course in Games Development just starting that year at Canterbury College, so I did that instead of going to Sixth form. This just naturally led onto Games design at degree level. I won a design competition at university that allowed me to work on and publish a game, so in five years or so, I went from no experience just leaving school to being a published game designer.

What other career paths have you taken?

I had a brief stint where I wanted to be a teacher abroad, but apart from that, I’m pretty focused on becoming a Game Designer. It’s a competitive industry, so I think I’ll have to put my all into it to really succeed. I’ve toyed with things relating to game design, animation, computer art and 3d modelling. I think I would be happy doing anything creative really, but I suppose my dream is to design games that are fun to play and carry a message of some sort.

It’s cliché to say, but you can get a good idea from anything if you think hard enough about it. For example there are a load of pieces of paper in front of me, you could take the properties of paper (foldable, light, stackable, you can draw on it) and apply this to something completely un-paperlike like, a man, and hey presto, you’ve got the basic idea for some sort of origami warrior videogame. You can couple this with any combination of other objects for interesting results. It makes the world a lot less boring when there are potential characters and game mechanics everywhere!

Locally, I think Medway is good because it is varied. In ten minutes I can be sitting by a river or be in the middle of a busy town. It’s certainly a good place to get a change of scenery fast!

I’m working on a game right now with a team spread around the world. I’d like to see this project to completion and release it for free in the near future. My dream is to own my own game development studio and create games that are fun. I think the best work comes through collaboration, so I’m always looking for people to work with!

I have two! Polycount is the first one, it’s a forum for game art, mainly. Specifically if you want to begin creating game art and have no idea what to do, it’s a great starting point. I think just being exposed to it has passively improved my skills. They run competitions and tutorials so you can improve yourself, and the whole site is forum based so it’s designed for you to post a piece of work and ask for critique.

DeviantArt is another favourite. It’s really popular, if you haven’t heard of it, it’s basically an online gallery where anyone can upload anything. You can sort by category, so if you need some inspiration, it’s perfect.

We really look forward to reading articles by Jack and seeing how his work progresses.

You can keep up to date with Jack through Twitter.