Like most people my earliest memory of Tracy Emin’s work and most prominent is the unmade bed from 1999.

As time went on I discovered she studied in Medway at what is now known as UCA, and in the last few years she has held various exhibitions in the South East. On a recent visit to Margate I felt I couldn’t miss a walk around the Turner gallery to check out her current exhibition.

Something that I love is Emin’s neon writing work as it shows her variety of creativity. Unfortunately only two neon pieces make an appearance in this exhibition. Reflecting very much on her life’s history the work on display is very expressive with some containing text that gives extra input into the concept behind the piece. 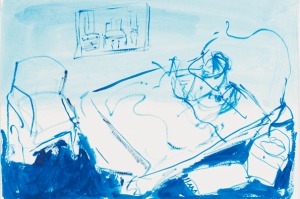 The majority of work on display were inspired by Turners female nudes, but personally I felt they lacked the warmth of an artist trying to capture the bodily form of a female. Of course Emin is often very open about her sexuality and this is nothing new, but I felt from the work that she captured an element of disappointment within her own sexuality, which of course was not really Turners aim in his erotic paintings – his nude paintings were often termed as beautiful. If you want an interesting read on that subject see “A Censorship story Goes Up In Smoke“.

There are a lot of repeats in the exhibition, which unfortunately I feel shows a lack of imagination in regards to a theme, and baring in mind 3 large rooms of the Turner gallery are taken up with repeat imagery until September, I can’t help but feel disappointed for the local art scene. I realise that a big name will attract numbers but I wonder how other artists will get to reach a big name status if so much space is taken up by one artist in what I feel should be a gallery for creatives no matter how big their audience.