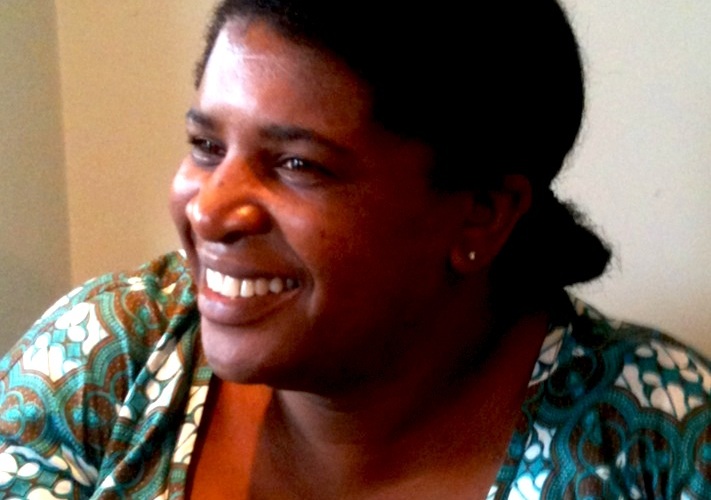 Henrietta Franklin is a fashion label run by Sharon Richards from her shop and studio in Gillingham, Kent. Designing and making made to measure garments for women and children, Sharon is one of the few fashion designers that still see’s through each stage of her garments being made – from her initial sketch through to the finished garment. Sharon talked to Creatabot to tell our readers how she got into fashion and remains independent as a designer…

I progressed into fashion naturally, I believe because I was an only child for the first 8 years of my life as well as the fact  I was also an only child among my parents’s piers. Let me explain: on birthdays and at Christmas I received many presents, one year when I was about 8 I had accumulated 7 dolls and they all needed clothes! My mother dabbled in making curtains and the odd dress for me, which is where I got started, by using the off cuts. I began by making dolls clothes and my hunger for clothes making and design progressed from there. At John Burn’s primary school, Battersea, we had needle work lessons, which stretched my imagination. At secondary school, Garret Green, Tooting, I took needle work and art as subjects, which I enjoyed. I remember my art teacher Sue Skelton, she was very inspirational. She opened my mind to many options in art and design.

I went onto to study at the London College of Fashion, I remember the interview day.  I remember what I wore, of course I do, I designed and made it! To this day I believe that was the biggest and most important event of my life to date. I got in! I studied there for 4 years, it was a wonderful time. I was one of the lucky ones: I was offered a job at my end of year fashion show: for an outer wear company.

“To succeed you would need to stand out and have contacts in large established fashion houses or be prepared to globetrot to places like China and India”.

From my experience I would say that my formal fashion education was paramount in facilitating my path in fashion. Unfortunately the fashion industry is an ever decreasing circle in this country. The combination of the intervention of computers and ever shrinking world make it feel almost like a pointless venture for new students leaving universities. To succeed you would need to stand out and have contacts in large established fashion houses or be prepared to globetrot to places like China and India.

The fashion industry “Rag Trade” that I worked in was primarily run by 3 ethnic groups. The largest of which was from a Jewish background mainly based in the West End of London, North London: Greek/Turkish Cyprian backgrounds, and the smallest group was in East London from Pakistani and Bengali backgrounds. I personally did not fit into any of these backgrounds so could only go so far. I started out as a designer/pattern/cutter at a Jewish company and ended up in design/sales at a Greek Cyprian company actually based in Cyprus. I felt that was the top of my career within the “Rag Trade”.

I soon reached a point though when I realised I wanted to be independent in my career, so the next natural progression was working for myself. This is when Henrietta Franklin came out of the shadows.

When I think about who inspires me today, I have to say Natasha Steer locally, she is an eclectic little maverick, she helps people to stand up for themselves, something she has done for herself successfully. She exudes confidence subtly. She is a bright light in the community that can only get brighter. Universally I have to back into history. Samuel “Sam” Sharpe – a Jamaican slave who played an instrumental part in the beginning of the journey that ended slavery. He is a part of why I am free and here today.

What about the future? I can answer that kind of question easily – to have a successful international business. Truly, in today’s economic climate my goal is to keep my business going.

Henrietta Franklin specialises in day wear, evening wear, wedding dresses, bridesmaids dresses and mother of the bride outfits. Sharon has also created the label “Tropical Fruit” which is her new range of hand made children’s wear made from natural fabrics wherever possible.