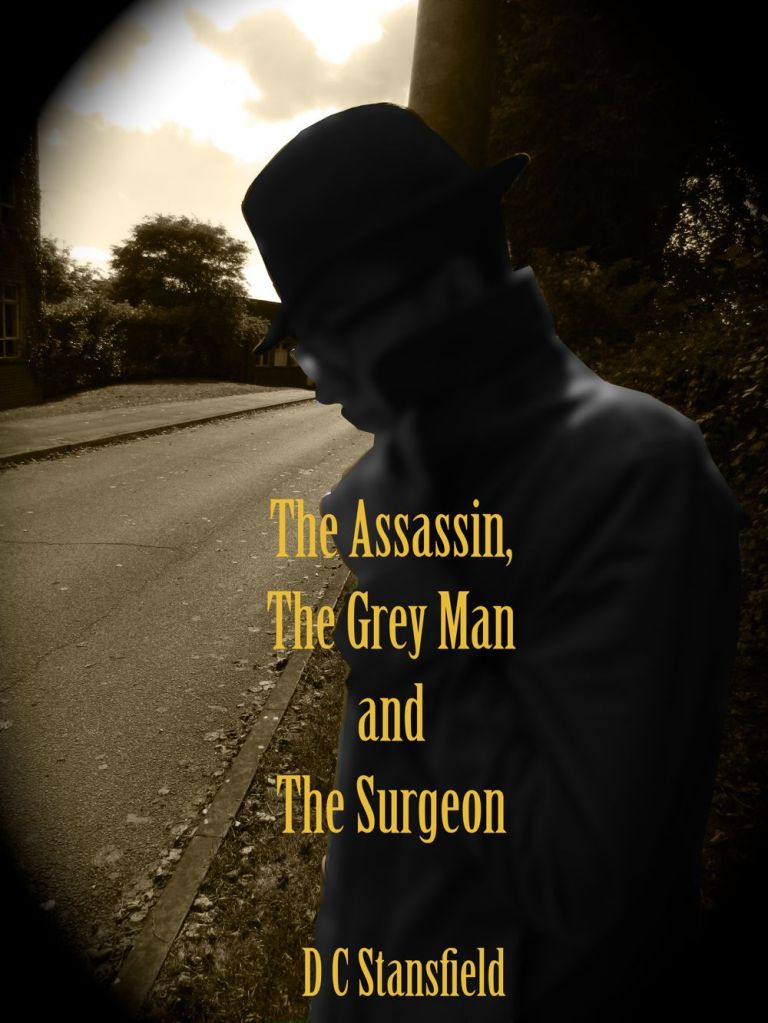 D C Stansfield has completed his first ever book – and, what’s this!? HE’S BEEN PUBLISHED! On the new form of ‘book’, an ‘Ebook’ on Kindle! Named, ‘The Assassin, The Grey Man and The Surgeon’ it’s the first book in the series of three which he is hoping to write if the book is popular enough.

Why do I sound so excited? Well D C Stansfield is my father and I am a very proud and inspired daughter to have another creative in the family. So far the book has received 99% 5 Star satisfaction on the UK Amazon store, with only 1% voting 4 stars (which is still high!)

A short summary of the book (adaptation of the blurb):

It was all going so well for Peter Lee’s drug empire. The only small annoyance had come from a little old lady who owned of all things a small corner shop. She had refused to accept any of his little parcels and wanted to go to the police, so she’d been given two bullets, the ‘double tap’, both to shut her up and to send a message to everyone else in the network.

Unknown to Lee she was married to a specialist, a man who, in a former life killed men for a living. He had two friends, one a gatherer of information, the master in his field, one a breaker of men, who was so vicious that it was rumoured that each time he hit a man he cut him. Each of these three men had spent thirty years and more playing the ‘great game’. Inside the security company called ‘The Firm’ they were legends known only as The Assassin, The Grey Man and The Surgeon.

Now living at the edge of the secret world and about to disappear into history, this atrocity had brought them back centre stage but the question is, do they still have what it takes to go up against today’s hard men?

I am currently reading the book and already stuck in, loving it, although can’t get the vision of my dad out my head which it amusing when you follow the storyline. We are a very proud household to say the least.

But how does one promote a book when one knows nothing about ‘publishing and advertising?’ Well, my dad came to the right place. ME. YouTuber/Tweeter/Tumblr/Facebooker/Genereal-confident-girl-in-emailing-companies/Currently-doing-media-work-experience and Creatabot blogger. (Most of the words are made up I will admit, but my point still stands). Therefore I’m spreading the word as best I can. Although, don’t feel I need to as sales have rocketed as one might say! It’s going rather well for it’s first WEEK out on the web!

Here you can watch a video where I give you all the details on the book, and in a couple of weeks I will be doing a full review of my opinion and it won’t be bias because he’s my dad I’ve told him I want to be honest. I am encouraging others to join me, read the book in my ‘by the end of November challenge’ (meaning read the whole book by the end of November) comment or send me your review on aostansfield@hotmail.co.uk and I will be making a Review video with honest opinions from as many people as possible. I’d love you to be one of them.

In return, I will be mentioning your YouTube channel, blog post, website etc on my video so promoting everyone as we go. If you don’t want anything promoted or want to remain anonymous that’s fine too. If you have any questions for the author himself I’m sure I can persuade him (in other words, he’d love to) personally email you.

The book is called ‘The Assassin, The Grey Man and The Surgeon’.

It costs only £1.53 and is available on the American Amazon (.com rather than .co.uk).

My email is aostansfield@hotmail.co.uk for any questions and honest reviews.

Thank you for reading.

Feel free to Tweet me if you have any questions or feedback:  @hislittleemoo

Email me for anything extra: aostansfield@hotmail.co.uk