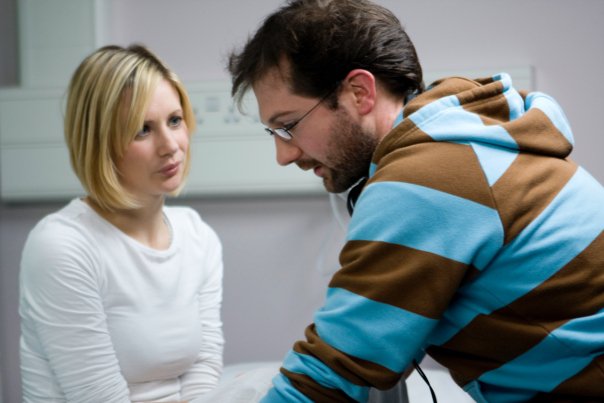 Kevin Proctor speaks to Creatabot about how he came to be involved in film production and became director of the web series “Self Centered”. Kevin Proctor is the ideal example of how to work your way up the ladder within media using your own initiative. Hopefully by learning more about Kevin’s past this can help to inspire others who would love to work in production.

“Things first started back in 1994 when I met my hero at that time Peter Richardson. Peter was part of The Comic Strip – he wrote, produced, directed and was the man who at that time I wanted to be and meet, and I did meet. I had just turned 16 and the only reason I met him was through a script I wrote when I was 15. Robert Popper, who was his assistant at the time read my script and wrote me an amazing letter back and even a reference which for a 15-year-old, was incredibly inspiring.

I really enjoyed doing video interviews with people who inspired me and I managed to arrange to meet Peter Richardson and do a video interview with him. I watched the interview so many times afterwards that I knew his interview off by heart. I think meeting people who you’re inspired by is a great way to move forward with what you want to do. They give answers to you straight because it’s not an easy business to work in and being blunt is the best formula. If you really want to achieve your goals then you’ll work incredibly hard to do so.

I remember when I was 19 I drove to Hatfield to meet Mark Huffam, the UPM who was just finishing on “Saving Private Ryan”. When I got there the only people around were Mark and a few others in the production office as filming had finished. I chatted with Mark, he was busy but he made time for me and said “so what do you want to do?” and I said “write” and he said “what have you got?” and I said “well I have got a red box at home and its full of scripts and loads of my work”. He looked at me and said “well, that’s a bit useless. If you want to write you’ve got to let people read it, get it out there!”.

That conversation always stuck with me because he was right, what’s the point in writing anything if no one reads it. So I began writing off to production companies such as “Working Title” and “Impact Pictures” who had just done “Shopping” – Jude Law’s breakthrough movie. British films like this and “Four Weddings and a Funeral” made me think “this is something I want to be a part of and right now” and encouraged me to do something about how I felt.

Peter Richardson gave me really good advice while I was trying to move my career forward. He gave the advice which is pretty much paramount to anything about this business, and that was to get down to the set where they’re filming and say you’ll help. He explained that he got so many CV’s explaining how they could shoot and edit and lots of other “stuff” that at the end of the day all you want is someone who says ”I will work hard and do whatever you ask, and I will do it well”.

I worked in lots of other random places, factories, hotels and so on to support my writing, just as many writers do. I left all that behind in 2001 when I went to study Scriptwriting at Bournemouth University, which is where I met Steve Keevil. We’d always script edit each others work, but physically sitting down and writing together didn’t happen until we left the course and started writing ‘Jimmy’, a comedy series. 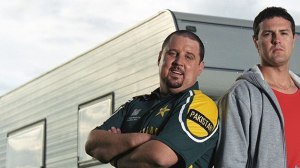 On leaving University, my first work in production was as a production runner on “Max and Paddy”, a Peter Kay series. It was unpaid, but that was fine, it’s what you do. I was up in Bolton for the last couple of weeks they were filming. I didn’t see anything, I went to the set once and spent the rest of the time in the production office. Did I want to be on set? No because I’d already decided that production was where I wanted to start my learning, like an apprenticeship, or trade and that’s where my focus was.

I wasn’t thinking about directing at that point either. I think you find out quite soon where you want to be and how to get there. But I also found out quite quickly, for me anyway, that just saying you want to write, you write or you are a writer will not help you reach your goals. As a runner you are there to do a job, you are there to be a runner and not a writer.

Along with working in production, I continued to write on my own and with Steve. ‘Jimmy’ took Steve and I about 2 years to write together and in 2006 I found myself working for a production company in an office above Robert Popper, who by now had gone on to create quite a career for himself. I saw Robert, we got talking and I gave him ‘Jimmy’.

My confidence was a positive move because Robert read ‘Jimmy’ and took it to the Commissioning Editor of Comedy at CH4 who attached us to “Objective Productions” and we went through about 6 months of re-writes before a final meeting at CH4. I was ready to quit working at this point to just concentrate on writing but Robert gave me a great bit of advice which was “you can’t afford to not work, you have to work, you have to live”. It was the grounding I needed as no one was going to suddenly say “Oh yes go right on through, Spielberg is just through there”.

You have to live and work and working within the industry is always going to be to your benefit when possible – you’re meeting people, you’re meeting everyone you need. Keep your head down, do a good job and you get remembered, then you say “actually I’d like you to take a look at this”. Rather than mailing out scripts to people you have never met, you work for them, they like you, you hand them stuff, if it doesn’t work out, so what, they’ve read it and it’s instant feedback.

‘Jimmy’ never got made, not because it was no good but there was no place for it. What we did get out of it was an open door to go back. Have we gone back? No. Why? Because I don’t think we’ve got anything that is of the standard I expect of us.

I know Steve and I can write, we write all the time, but it doesn’t mean it’s any good or fits the trend at the time. The whole ‘Jimmy’ comings and goings all happened while I was working as a production runner on a film production called “Eastern Promises” who heard about ‘Jimmy’. At the end of the job I was given a Macbook, as a gift from the producers, I couldn’t believe it! I was so stunned, stunned that they believed in me so much to buy me a Macbook and say to me, “now go write something”.

It was while working on ‘Inception’ as an assistant to one of the cast that I realised I wanted to direct. I’d never really been on a set as much as I was on this film and every day that I was in, I had the time to watch and take it in. So I got in touch with Steve as we’d been batting around an idea of making a web series and I just said, I have to direct it.

Web series is something which is a completely different ball game altogether and one that I am still finding my feet with. In post I kept saying to Nick, the editor, “But do you get it? Do you think people will get it?” This is why post production took so long. I wanted to get everything right – the sound, the colour, the music, everything. I mean, Joel did an amazing job on the music and it’s at the end of Episode 6 over the credits. We didn’t put it in the series as it didn’t fit right, it worked better with nothing. So you make so many choices, that take so much time and put everything on hold until you’ve tried and exhausted all the options in your head. Tam, Nick, Joel and Marcin (the sound designer) were just amazing by seeing how different things would work just to appease my twisted view of it. And 9 times out of 10 I was wrong. But I had to try it.

“Self Centered” isn’t amazing, it’s not perfect I know that, I find faults all the time. We had no art director or production designer or props department and it shows, well to me it shows, but what can I do about it now. We had no money and very little time, but we achieved a great deal by calling on the resources through the contacts we’d built up over the years. And I think the hard work shows because everyone who worked on it was a professional that I’d met through my years in the industry

Before we started shooting ‘Self Centered’ and even during it, I banned Steve from Tweeting about it because I’ve seen hype, I’ve seen people set up websites about ‘projects in development’ and ‘projects coming soon’ that are still ‘in development’ or ‘coming soon’. If it’s not ready, why promote?

Why a web series? A short film is kind of a show reel for those that want to direct. Paul Webster, who produced “Eastern Promises” and was one of the people who bought me the laptop, said that writing a short film for someone else to direct really won’t work for the writer as it’s a “directors” calling card. So lots of short films are by writer/directors. With “Self Centered” we were making a product, a brand, that would allow us to find and build an audience to create the longevity.”

Speaking about the future Kevin states that being a “doer” means not always revealing your dreams.”But if you want to know where my focus is and where I am heading then writing, producing and directing would be it. Not all at once and not all my own projects, but it would be satisfying in the coming years to build up a functioning relationship with writers and produce their work, or like I did with Steve, find his project and direct it. I like hard work, and I never switch off. It might be megalomaniac to do all three, but having control means that there is only your own self and instincts to resent should something not work out.”

You can keep up to date with Kevin Proctors work by visiting his Facebook page:

and visiting his IMDb page at:

The fantastic web series “Self Centered” can be watched in HD here http://www.selfcenteredseries.co.uk/

Thank you to Kevin Proctor for speaking to Natasha Sexton at Creatabot.