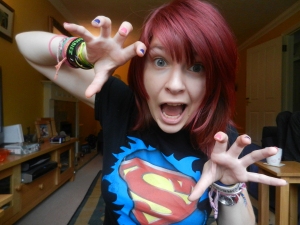 We have a fab new contributor – Alice Stansfield is a creative Vlogger from East Sussex who will be bringing a nice selection of articles and videos to Creatabot.  We are really looking forward to reading and seeing her work and we thought you would like to know more about her.

So Alice, what is your creative background?

I used to be in a local group at my college called ‘Spiritus’ which performs at festivals (such as London and Brighton) so I would be dancing, on stilts or designing costumes. From this I got really into choreographing and directing scenes and routines. In primary school I was part of a dance club but this was when my dance really started. However, at this point I became more involved in drama and recently left a club I was part of for 3 years performing on stage, directing, making films and more. Outside of this drama club I audition at National Youth Theatre and performed at the Royal Shakespeare Festival.

I’m still very into my drama studying at it at AS level and hoping to carry it on to next year with media studies. Studying media has made me want to continue it on to University as I love making films and for the last few years I’ve been making vlogs (video blogs) and other projects to put up on my YouTube channel and one I share with two friends called ‘TwoNAC’ (www.twonac.com).

At GCSE level I won an award for a project I did, ‘The Barnes Gate Manor Award’ for a project I wrote called ‘Ripper’ and made a trailer for with a friend. At my college, outside of my subjects, I film and write some articles for the school website to gain experience. Also, a few years ago I entered a competition with people at my school to write a short story (one page long) to be published in a book called ‘SAGAS’. I was one of the people to get published and still try to write short stories today, although my stories become more video based. Recently I have been busy writing lyrics for a song, which my friend is creating as part of his music experience and we have already made a music video.

Creativity has really made me who I am and I have left a few things out, but this is the things I have done and currently do that really shape my creative mind.

Local inspiration has to come from working with friends, as cheesy as it sounds, without working with people ideas do not get shared. At this point in my life where we are all in college still and fresh with ideas, listening to each other and experimenting with ideas is inspiration itself.

Universally, many actors are inspirational (such as: David Tennant) but mainly people from YouTube such as Alex Day. Those who amaze so many people out of just putting their content on YouTube and make money from something so simple, are so inspirational to me.

A creative website I love, as mentioned before, has to be YouTube where people share all their video projects to make their own channel content. Another website I use is Flickr where you can share photos for others to see. Both these websites produce UGC (user-generated content) meaning people can give feedback on what I and others have worked hard on which really boosts confidence and allows improvement to be made.

Thank you Alice, we are really looking forward to seeing your articles!