October 26th, 27th and 28th saw the Castle town of Conwy, North Wales, transformed into a giant piece of digital art, numerous buildings in the town became projection backdrops for digital, video, sound and light art created by a host of local and national artists.

The event is currently in its second year, and like last year coincided with Wales’ largest food festival. The event also paid homage to Alan Turing.

Famed for his mathematical intelligence Turing was fundamental to The Enigma Machine success in the 2nd World War, and considered one of the forefathers of modern computing.

To mark the centenary of his birth, Artist / Curators Craig Morrison and Joel Cockrill were commissioned by the Arts Council of Wales to make a significant light work dedicated to Alan Turing.

The piece, which is entitled ‘Thank you’, was installed in Conwy Castle. Two large lasers programmed with Rolling Spheres or ‘Hyperboloids’ positioned high above the town on the castle towers, beamed green lights that swept across the sea and the sky, the beams flickering at a frequency calculated using Morse Code projecting ‘Thank You’ towards the heavens.

To accompany the lasers a large scale white neon positioned on a plinth, identical in size to the Fourth Plinth in Trafalgar Square, so that Turing’s poetic epitaph can be read while the lasers pulse into the night sky behind.

Craig states that “The significance of the plinth is inherent to the piece. The Fourth Plinth celebrates all that is contemporary in the arts today. Alan Turing’s abstract mathematical achievements epitomize what the plinth represents and in some way is responsible for probably most of the artwork that is displayed. His fundamental work in computing has helped to shape what we see in contemporary life. His wartime work on codebreaking definitely contributed to the preservation of our freedom of expression.” 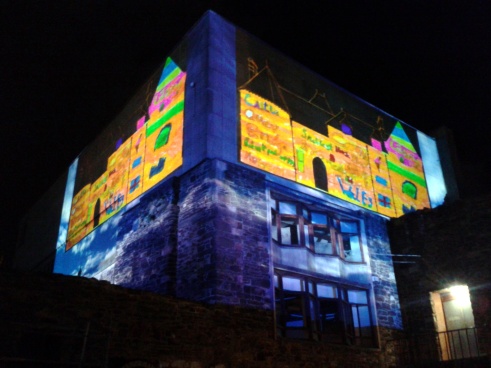 Children’s drawings of Conwy projected onto the Civic Centre

Other artists taking part responded to the town and its history, here’s a few videos from my favourites: 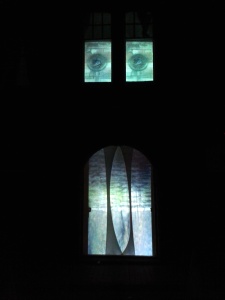 Neil’s work explores surrealism and its relationship with every day life, the photomontage video creates a face using ordinary everyday objects we normally don’t notice or give any time too: 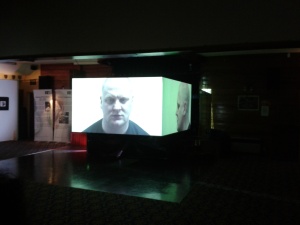 Alan’s video was projected onto the Castle – which was incredibly moving and overwhelming  – the scale, soundtrack and Alan’s presence made for a very powerful piece! Here’s the web version of the video and below that is a photograph by Roger Smith  of the projection on the Castle

I couldn’t find a version of Elly’s beautiful video entitled: ‘Hireath’ [loosely translates in English as ‘Longing’ – but there is no direct translation] that I could embed but she has put it up on her wonderful blog so head over there for a peek! The video was projected onto a bus outside of the British Legion, and watching it made me think of the time I spend daydreaming on the bus home from work, longing to get home, its a really evocative piece and beautifully made!

Alys, who performs in the video, each night completed a live dance performance in front of a projection inside the British Legion, which was stunning I have to say! Over the weekend they then repeated the performance this time in front of the projection on the castle – which unfortunately I missed 😦

It is a privilege to have such an amazing event right on my doorstep, and I count myself lucky to have seen it – especially considering the whole event was free! Well Done to all the team, organizers, helpers, Arts Council Wales, Cadw, Conwy County Council and of course the Artists involved!!